Welcome to the section dedicated to natural yarns. Phrema design is always looking for high quality products! This page offers a selection of yarns made from specific fibers, particularly valuable:

Hemp fiber for textile use is obtained from the processing of Cannabis sativa (specifically from the phloem, a set of tissue elements that lead the descending elaborate lymph).

In ancient times it was already widespread all over the world as a raw material from which a high quality, thin and strong paper was obtained. Some examples of printing on hemp paper are the Gutenberg Bible (1450), The Declaration of Independence of the United States of America ( 18th century), the works of Mark Twain, Victor Hugo, Alexandre Dumas, Lewis Carol ( 19th century).

Nettle is one of the best known and most used plant species by man since ancient times. It seems that already in the Stone Age there were crops for human and animal food purposes.

As for its textile use, it was used to create laces, fabrics and even paper. One of the oldest finds dates back to the Bronze Age. Specifically, it is a fabric that wraps a body. It is said that even the uniforms of Napoleon's army were in nettle fabric.

To have the cultivation of it in Europe, we waited until the 20th century. During the First and Second World Wars, this material replaced cotton, which was unobtainable at that time. With the "reappearance" of cotton, this fiber was once again forgotten.

Only recently, thanks to the greater attention paid to environmental protection, interest in this plant has again aroused. Its cultivation does not require pesticides and herbicides and can take place in over-fertilized soils. Another essential element is that nothing of the nettle is thrown away! The textile fiber is obtained from the bark, with the internal part cellulose is produced for extremely valuable paper and finally, the fresh ends and leaves provide a highly nutritious product for zootechnical use.

The name of this fiber changes according to the species used, for instance, we could find Ramper fiber (Boehmeria nivea), Allo fiber (Urtica ferox, Urtica crenulata and Urtica urentissima), our nettle fiber (Urtica dioica).

Linen is the oldest textile fiber in the world. The history of its cultivation and processing dates back to 8000 years before Christ. It was grown in ancient Babylon and Egypt, where artifacts made with this fiber have been found in tombs. It was also used to mummify the pharaohs.

The "Linen book of Zagreb" is the longest text in the Etruscan language (about 1200 words) and is the only existing linen book, as well as being considered the oldest in Europe.

Thanks to the Phoenicians who made it a valuable commodity in the trade, this material landed in Europe and spread to Greece, Brittany, Ireland, England ...

Despite the time, this fiber has never abandoned man. Considering the rediscovery of nature and attention’s increase for the environment, the demand for linen is growing. Compared to the cultivation of cotton, it saves 650 thousand cubic meters of water and 300 tons of plant protection products because it only needs rainwater and does not require the use of pesticides. Plantations absorb 250,000 tons of CO2 every year. Being of vegetable origin, it is biodegradable and hypoallergenic. Its cultivation does not impoverish the soil but preserves it.

The material obtained from linen is antistatic, therefore it does not attract and retain dust. It has great moisture absorption capabilities. It can retain a mass of water equal to its dry mass. This also makes it suitable for dyeing.

Finally, being insulating and thermoregulator, it can be used all year round and linen clothes and artifacts last over time.

Ahimsa silk (as it is called in India) is also known as "non-violent silk" or "organic peace-silk".

It was born to respond to some ethical choices. It is obtained from silkworms, but its transformation occurs only after the larva has completed its metamorphosis by transforming itself into a butterfly. The killing of the bug is thus avoided.

The spinning, therefore, is more complex, since instead of having a single yarn to “unroll” from the silkworms, there are fragmented yarns because the butterfly makes a hole on the top to come out. Its characteristic processing, therefore, gives us a slightly thicker and more irregular yarn, but no less precious for this, also because it is not easy to find on the market.

Pay attention to this! It happens that Bourette silk is identified as Ahimsa silk but it is not the same. Bourette silk is obtained from the processing of silk waste (usable residues deriving from the processing of the product), so silk is produced by killing the worm or second-rate defective worm. Ahimsa silk allows not only the worm to end its life cycle in a natural way, but the raw material is always of the highest quality.

Himalayan wool is obtained from goats and sheep living in medium / high altitudes. These animals are the main and most important source of income for the shepherds who raise them.

The wool obtained with completely manual processes (from shearing to spinning) is soft and warm, but also a little more "rustic". This is because the raw material does not undergo any type of processing beyond those strictly necessary.

As already mentioned, this type of wool is very warm. This is since the animals live on pasture all year round in a cold and rainy environment, and this means that their fleece is rich in lanolin.

Yak wool is obtained from the fleece of the yak (Bos grunniens), a large bovine that lives in the Himalayan regions and in some areas of Mongolia and Central Asia.

Known in Tibet as Khullu, the fiber obtained from this animal has been used for millennia by nomadic populations to make ropes, tents, clothes and blankets. This is because the yak that lives in the wild, enduring bad weather and temperatures that can reach -50 ° C, produces a very warm coat. But in the summer the temperature rises (32 ° C) and our bovine naturally loses the excess fleece to adapt to the climate. The shepherds, therefore, have to collect it by combing the animal.

But what are the advantages of this type of wool?

As already mentioned, it is a very warm material. Its softness is comparable to that of cashmere, considering that the diameter of the fiber is very similar. Finally, it is breathable and, contrary to popular belief, it does not have a bad smell.

The natural color of the yak fleece can be dark (mahogany/black) or light (ivory/ashy). The latter is much more appreciated and admired as animals with light fleece are rarer.

Please contact us for requests for products and samples or if you want to see our yarns.
We are constantly looking for high quality yarns both in Italy and abroad.

Sign up for our newsletter and stay updated on the latest developments and special offers.

Hemp has been used since ancient times. The Phoenicians were likely to use it to build their departures.
See the technical sheet

Nettle fibre yarns have been used for centuries in Nepal. Eco-sustainable yarn as it is completely biodegradable. It is hand-spun.
See the technical sheet

Linen fabrics are some of the oldest fabrics in the world. Wear-resistant material, it comes with natural shade (not dyed) and hand-spun. Can be dyed on request (minimum order 1 kg)
See the technical sheet

Ahimsa silk is a kind of non-violent and vegan silk. The silkworm can complete its metamorphosis to the moth stage and will not be killed in the cocoon stage. This yarn is very peculiar since is composed of strands of different lengths twisted together. It maintains its lustre and resistance. Furthermore, hand spinning gives it an irregular thickness. We sell it in its natural colour (white). Recommended for artistic creations and pieces of furniture.
See the technical sheet + colors

Pure wool. The Tibetan sheep live in an extremely inhospitable high-altitude environment. The wool we have chosen is rich with lanolin. It is hand-carded and hand-spun. Yarns dyed with natural plant-based dyes or mineral ones are available on request (min. order 1Kg). Suitable for loom weaving and knit work
See the technical sheet

Wool obtained from sheep that live in medium / high altitude all year round, feeding on what they find in nature. Being animals that always live on pasture and therefore also in the cold and bad weather, their wool is rich in lanolin. apart from cleaning, it does not undergo any type of treatment. It is carded and spun by hand. Its white color is the natural one of the animal's fleece. Also available in solid color. Consult the technical data sheet in the ARTISAN YARNS section. Suitable for knitting / crochet and loom. Title 100 knots
See the technical sheet + colors

It is produced from the coat hair of yak, a long-haired bovine. This wool is completely natural and hand-carded and hand-spun. Yarns can be dyed on request (min. order 1Kg). Suitable for loom weaving.
See the technical sheet

It is produced from the coat hair of yak, a long-haired bovine. This wool is completely natural and hand-carded and hand-spun. Suitable for loom weaving.
See the technical sheet

Feltring is the process of brushing the fibres to organize them, is a hand or mechanical process. Natural colour. Yarns can be dyed on request (min. order 1Kg). Suitable for loom weaving.
See the technical sheet

100% Pure mohair fiber made in Italy. Produced by Italian breeders, it is provided in pre-washed and combed tape. Available color: natural white. Suitable for spinning and felt processing
See the technical sheet + colors

Fill out the form to be contacted and receive more information. 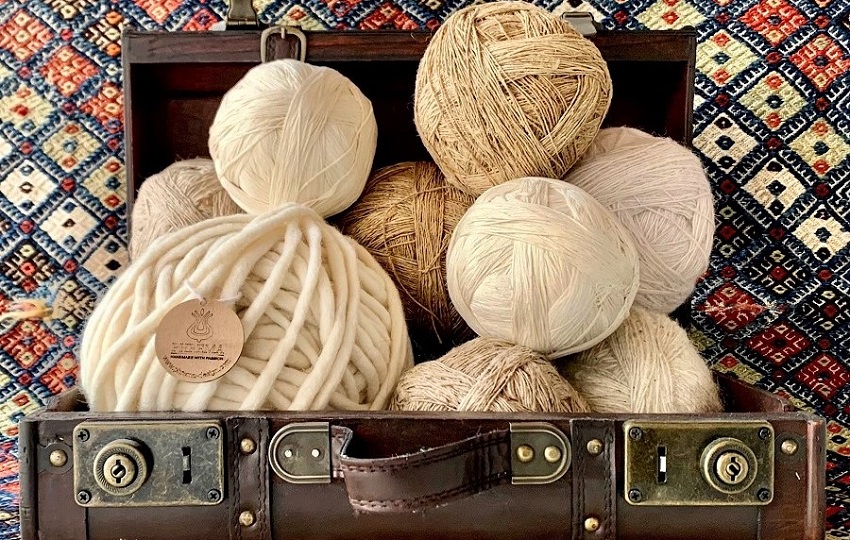 use of personal data